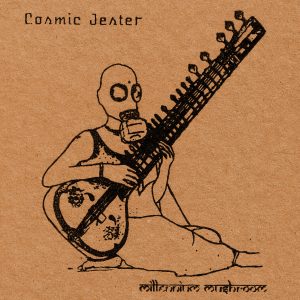 Cosmic Jester are a psychedelic band, that was formed in 2015 about summer solstice by Lucifer Sam and Roboo at the Garage Pankow in Berlin. Lucifer had been working alone from 2009 as a multi-instrumentalist doing recording sessions and writing. He then joined the Garage Collective and allied with Rob there.
The two have recorded their first album ‚Millennium Mushroom‘ in 2015 which had been released in march 2016. About the time of the album release, Grimbold joined on keys.